Everything I have done on the car is specific to the car so you won’t see another like it. 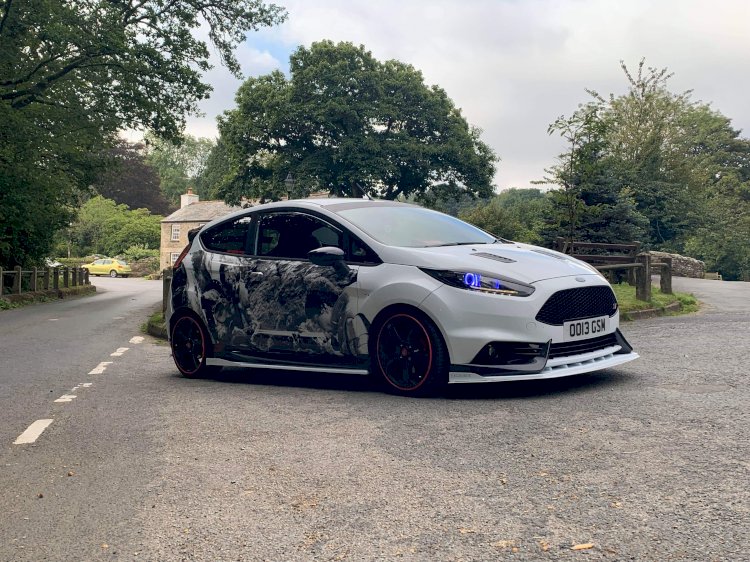 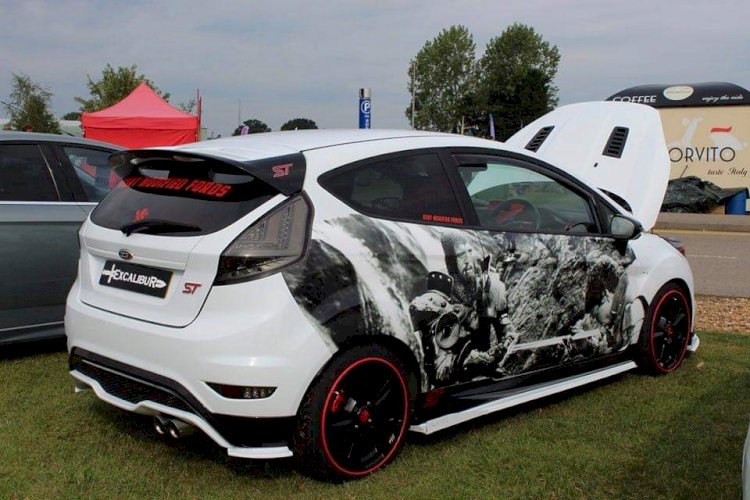 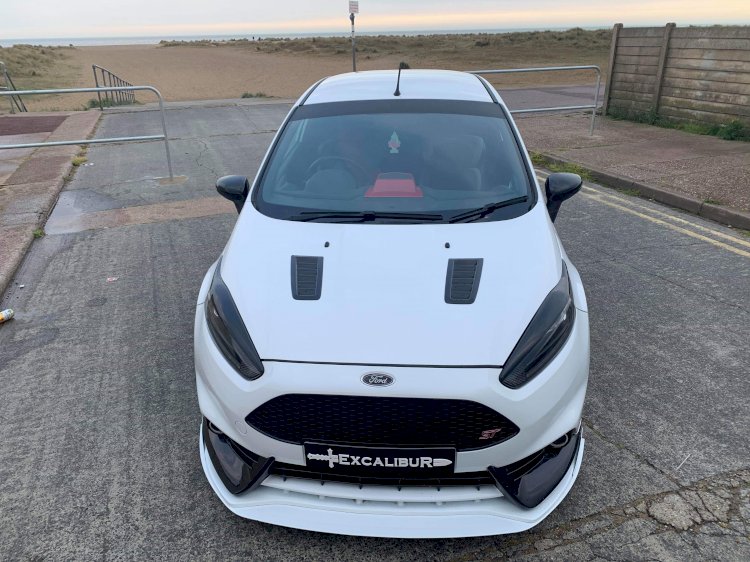 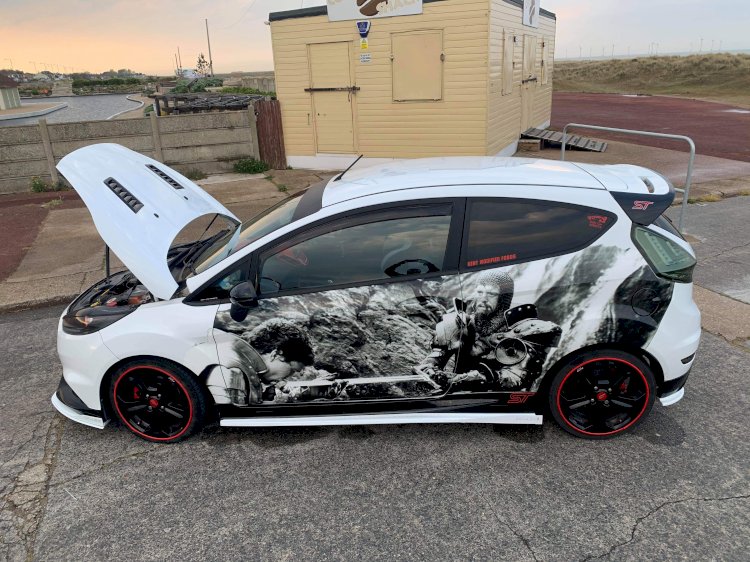 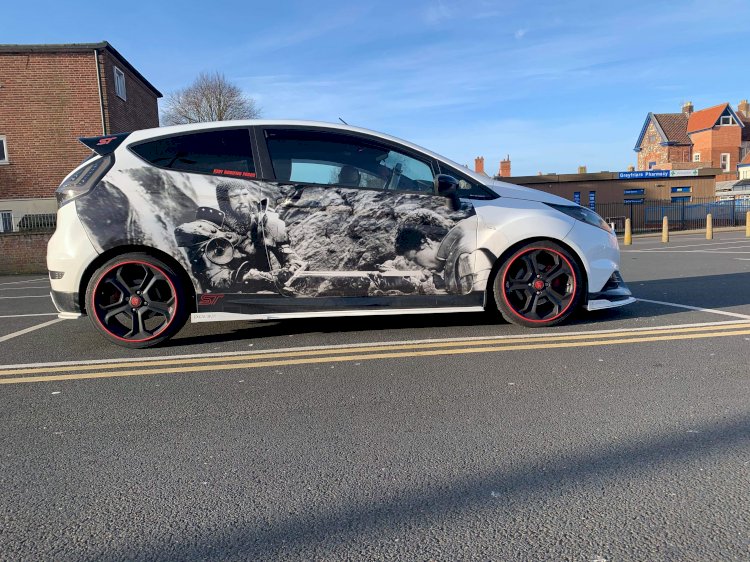 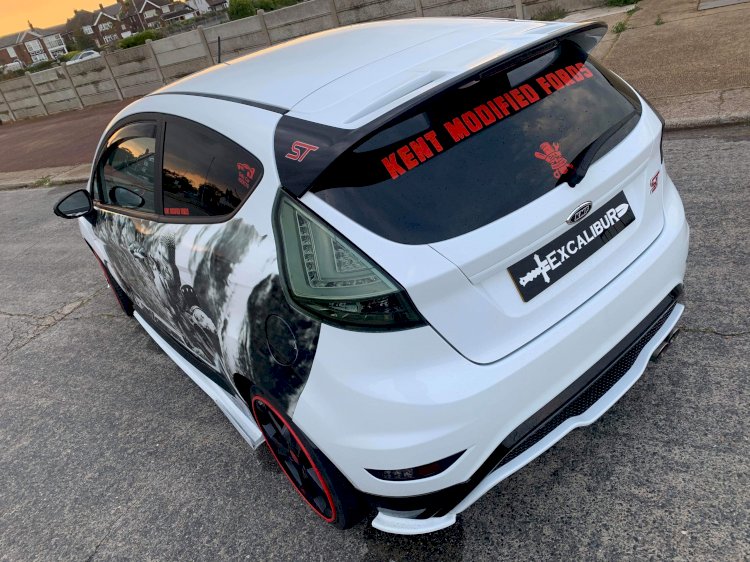 This Car is in the Special Ford Magazine and Novembers Edition

My name is Gary Miller

I’m 43 and I come from Bromley, Kent but I live in Great Yarmouth, and I work as a purchaser for an oil company. I am a single dad to a great 5 yr old boy and he is the reason my passion came back for the car scene.

When I was a kid the car I had always wanted when I grew up was a MK1 Escort because my uncle had one and I just loved everything about it, the sound it made, the lines. From that day that was my dream car. As I’m the oldest of seven kids from a single parent I never had the opportunity like a lot of people so I worked for everything I got. I left home at 17, got a job and worked hard. In 1996 when petrol was

Only 0.52p per litre I did a one-week crash course and passed the first time I then bought myself a 1982 Mk2 Fiesta 1 Ltr after six months I finally found my dream car which was a black 1973 1300 Gt MK1 Escort which I bought for £500, now this car was everything, I got pulled by the cops a lot just because the car was clean and they wanted to look at it, about a year later It got written off due to a learner driver pulling out from my left on a roundabout instead of giving way to her right at 11 o’clock at night, no L plates displayed, I went to work and I got blamed for speeding as I was a young driver, I was lucky enough to own a few more MK1 Escorts the last was painted like Cole trickle's car in days of thunder.

In 2002 I moved to Norfolk with my wife and daughter, I lost my job and then went south in 2004 I split from my wife and got divorced, she ran up massive debt under my name and the only thing I had to sell worth anything was my MK1 Escort :(. After a few years, I got myself back on my feet and bought a 52 plate MK6 1.4 Fiesta Zetec in Panther Black which was a great car to look after, so well the full garage loved working on and it was always serviced on time, then around about 2011 and 72k miles the engine packed in so traded it for a MK6 facelift 1.2ltr Fiesta which was ok but didn’t really care about it.

In 2013 my flatmate who works for Ford told me that they were bringing out a new Fiesta ST and when I saw it that was it I knew I had to have it. I thought it was time I started thinking of myself. When I finally managed to sort out my finances and sold the MK6 I bought myself a 13 plate Fiesta St180 with red seats and I loved it. In 2014 my friend at ford needed to make numbers so I traded in the white ST for yes you guessed it another white ST180 with red seats on a 64 plate.

I've loved my cars but wasn’t in the car scene, then in 2015, I discovered I had a son who now lives with me, more white St’s started to appear in the area in 2017 I thought I may as well join a club and start going to shows with my son so we went to Snetterton to a ford show I then saw a club called Kent Modified Ford, so I asked if I could join as that is where the heart is, it turned out that some of the members I went to school with were members as well. In 2018 I thought I wanted my car to be totally different from everyone and all the white St’s, this is where my other passion came in handy.

Going back to being a kid I have always Been fascinated with the legend of King Arthur and the Knights of the round table, in 1981 I remember the film Excalibur done by John Boorman so I thought that my car would be dedicated to the film so it began.

The first thing I did was have the car mapped with Mountune MP215 along with the cat back and Exhaust by my local Ford Garage Pertwee and Back in Great Yarmouth I then bought the Maxton Design Front spoilers had them sprayed pearl black along with the rest of the bottom part of the car all around The hardest part to do was the wrap done by @Reproart in Great Yarmouth who are a great bunch and they did a great job and not too expensive, once I found the right movie clip to go on the side and make sure it was in the correct format it came out well and as you can see well worth it then engine bay was and again this took a while as I had to give the artist some ideas. In the end, he watched the film and once he was ready I got the engine bay parts from @paintmodz who again are a great bunch of lads and who are really helpful and good value for money, the artist who is based in Norwich J Spurgeon email address. He did a great job and at a great price please drop him an email.

My headlight and interior light and dials along with the new design door seal done by SAS Conventions on Instagram and Facebook Simon and Trevor Sibthorpe, again great work and fair in price, the Ally love line kit was bought from Triple composite, all my LED bulbs bought from Autobeam. I just rushed and got the work done in time for 2019 Fordfair would have gone to more but money and other stuff would not permit it in 2018 I went to FordFest and Ford Fair I would like to be on company stands but the waiting list it long and I tried to get sponsors without joy again was late on the scene.

Everything I have done on the car is specific to the car so you won’t see another like it. My front splitter is a merge of Maxdon design due to my front spoiler and the Ally Triple composite with Fins which I had re-engineered to say Excalibur. I did some small thing myself and if I needed to know I searched YouTube and found Car rambles well

In 2019 I and my son finally went to Cornwall to Tintagel the home of King Arthur the local paper has done 2 write-ups about myself and the car and of course while there it turned heads and had a lot of people asking about it, with loads of cameras all of a sudden appear and take photos of my car or people standing next to it and having a photo taken with it.

Due to the Covid19, this year has basically gone down the bog as no money to get car parts so still have a few things to do. I want to get some custom made wheels when I find someone who can design and make, looking for a spoiler that it different but looks right on the car, I have a spotlight kit to install at the front, internal want to change my seat belt with Kolour Koncept a few parts need paint red inside, may change the colour of my carpet to red and looking as seat designs, I’m also looking at a gear knob design and centre caps for my wheels, eventually I will then maybe look at engine upgrades. 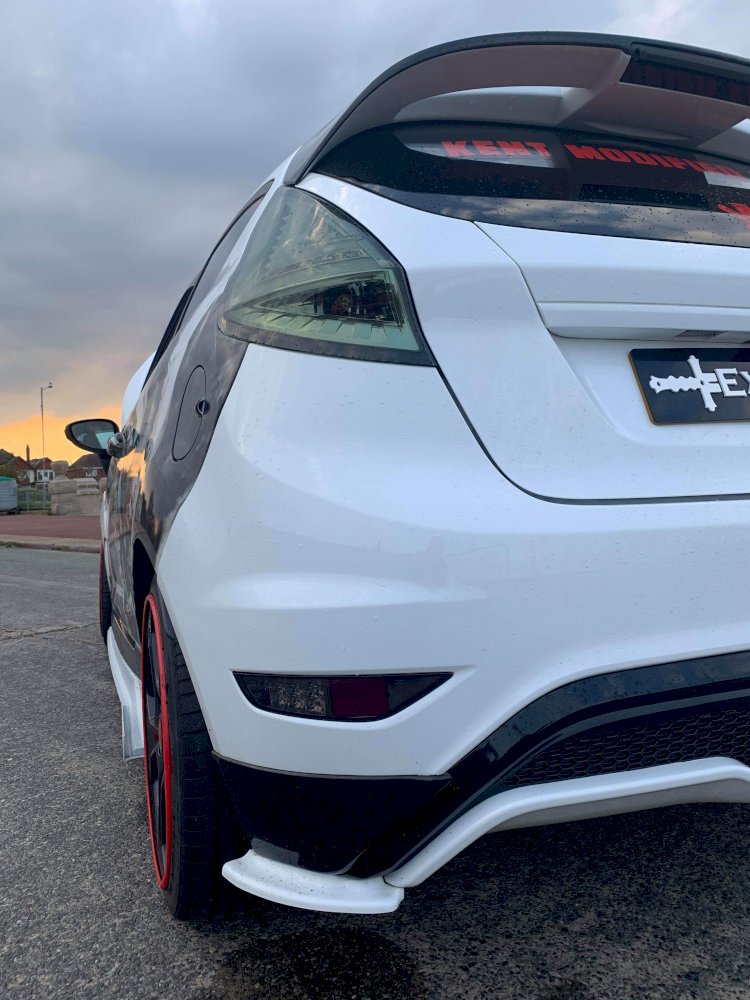 Pertwee and back Great Yarmouth 01493664151 (Supplied and Fitted all Mountune, Good value for money and service car every year)

Reproarts does a good job for a reasonable price (wrapped car)

Autobeam some really nice kit worth the money(supplied LED bulbs)

Most of the work done on the car was outsourced but I painted the interior parts, fitted the engine bay kit, rear light rear fog lights and wing mirror indicators as well as the gas struts.

I want to change the colour of my seat belts and carpet, I'm working on a design for my self-centring wheels caps, and wheels and gear knob then just got to find someone to make them, also looking at some seat designs, I may then venture into the performance area, I may want to do other things if I see something I like but everything on my car is made to fit the theme of the car so will take time

I have not entered any competitions but to be honest, I would not know where to start but I have been in print my ford and I have been in the camelford&delabolepost with regards to my cars visit Tintagel.

My Dream car, well this is a weird one as it’s a MK1 Escort Mexico all these supercars don’t really do much for me but if I had to take one I would have a Porsche 911 GT3 but that’s is I had to have it